Twitter In Praises As Sania Mirza Seals Another Tennis Victory! 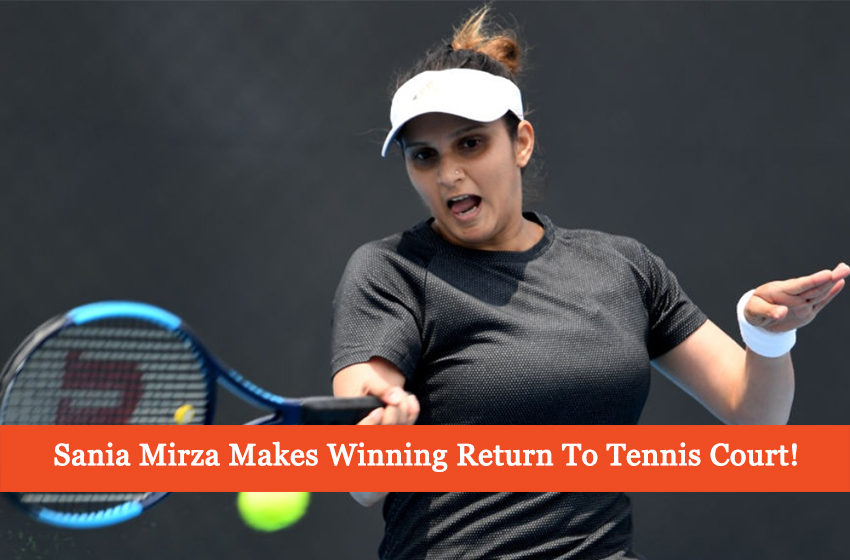 Considered to be one of the best Tennis players, seeing Sania Mirza play is definitely a delight to see. Already having many big achievements to her name, recently the internet was lit up after the star athlete made an exceptional comeback. Advancing in the Women’s Tennis Association (WTA) of the Hobart International, Sania Mirza’s amazing win filled social media with praises.

Married to Pakistani cricketer Shoaib Malik, the star Tennis player is often seen caught in controversies online. From taking a break from the game due to pregnancy to celebrating her later-born son Izhaan’s first birthday, the world has seen it all. Returning to the court, recently, Sania Mirza sealed another big victory as she and her partner move towards the quarterfinals of Hobart International.

Check out what the star player posted!

Today was one of the most special days of my https://t.co/OmE4Vq7KlQ have my parents and my little baby boy wit me in my first match after so long..and we WON our first round.feel very grateful for the love I am receiving.. BELIEF!! Takes you places 🙃YES my baby boy,we did it💪🏽 pic.twitter.com/xxPQ4E2IFE

Posting a celebratory tweet on the win, Sania Mirza called it one of the most special days of her life. With a snap of her son Izhaan side by side with a picture of her, while playing, the star player took to Twitter to share her happiness. Apparently, Sania Mirza had her parents and her ‘little baby boy’ in the court watching her achieve another professional milestone.

”Today was one of the most special days of my life!”

Particularly, Sania Mirza wrote, ”Today was one of the most special days of my life to have my parents and my little baby boy with me in my first match after so long..and we WON our first round. Feel very grateful for the love I am receiving… BELIEF!! Takes you places. YES, my baby boy, we did it”.

According to official reports, Sania Mirza along with her doubles partner Nadia Kichenok played the WTA tournament. Ousting the other team with a good score of 2-6, 7-6 and 10-3, Mirza and Kichenok made their way to the quarterfinals. The team, against, also had famous professional Tennis players named Oksana Kalashnikova and Miyu Kato, respectively.

Reportedly, Sania Mirza was on a break since 2018 on account of her first child being born and recently returned. Eventually, soon after the winning news broke out, even Sania Mirza’s army of fans couldn’t hold their excitement. With posts lauding the star player on her recent achievement, many young girls around the world even look up to her as an inspiration.

No doubt about that!

Your each win is a victory to a million women who’s inspired by your life.

Congrats @MirzaSania, its a great come back..

some green tea leaves of #Palampur for you.

”Entire India is cheering for you!”

What a brilliant snap of that hi 5 with your kid. You are a star. Keep going. Entire India is cheering for you.

Congratulations Sania. May Allah grant you guys more success with Izhaan and your family by your side always! Ameen. Keep going.

Have anything to add to the story? Let us know in the comments section below!