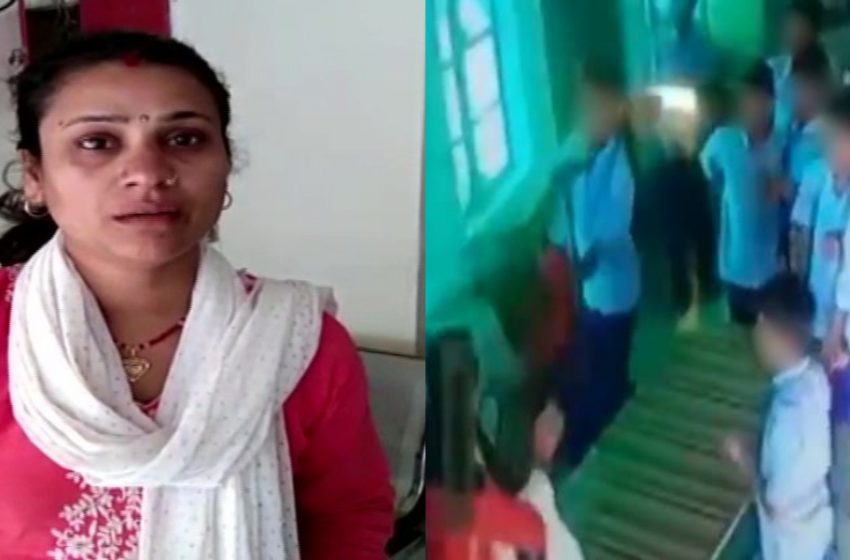 The humanity rule suggests respecting every individual living in this world in order to get the same in return. But still, some naive humans pull out the worst side in front of their future makers and the proofs start to float on social media. Similarly, earlier this week, a group of students studying in a school in India thrashed their female teacher with a plastic chair.

A group of students beats up a teacher in a school in India!

Considered to be one of the highest-ranking professions around the world, being a ‘teacher’ carries a huge responsibility. Unfortunately, teachers getting humiliated and disrespected often makes it to the news. This week, on Tuesday, a clip of a group of students beating their female teacher in a school in Raebareli city of India.

Also read: This Pakistani Girl Shares Why Teachers Need To Stop Abusing The Students In Every Way!

The whole incident was captured in the CCTV cameras installed in the classroom!

This was indeed an extremely disrespectful act by the classmates and deserves punishment. According to media reports, the incident took place at the Gandhi Sewa Niketan in Raebareli city of India and the victim is Mamata Dubey. Moreover, Dubey also works with the child welfare association of the country and was teaching in her classroom when the attack was made.

Fortunately, the whole act of violence was captured in the Closed Circuit Television (CCTV) camera installed in the class. While Mamata Dubey was sitting at her desk, a group of students came towards her ruffled. As per the video, a quarrel began between the students and the teacher and out of anger a student started thrashing her with a plastic chair.

Here’s what the victim had to say about the incident!

Later, while speaking about the incident, Mamata stated, “I was locked up in the washroom at Gandhi Sewa Niketan by the children. When I talked to authorities about it, they said that children can do whatever they want to. When I went there after two days, I was beaten by the children. I also went to complain to the district administration.”

According to the victim Mamata Dubey, prior to the students’ attack, she had complained about the aggressive behavior. Unexpectedly, the authorities backed the students and said, “children can do whatever they want to.” Later, after two days, the same students beat her with a chair and severely humiliated the highly respected profession.

“The manager has been trying to harass me and even orchestrated this attack on me!”

Apparently, Mamata Dubey was reinstated after the former district magistrate Neha Sharma left the seat. Further, the teacher spilled that she had a beef with the manager regarding the unusual posting and the students’ attitude. Moreover, she maintained, “After Neha Sharma was transferred, the manager has been trying to harass me and even orchestrated this attack on me.”

Check out: The Government Has Just Made ‘Drug Tests’ Compulsory For Students & Teachers In Islamabad!

The same manager fired Mamata Dubey after the issue went to the higher authorities. Upon inquiring, the students stated that the teacher had called them ‘orphans’. According to reports, Mamata has been appointed back to the post and her manager still holds filthy intentions against her.

Have anything to add to the story? Let us know in the comments below!