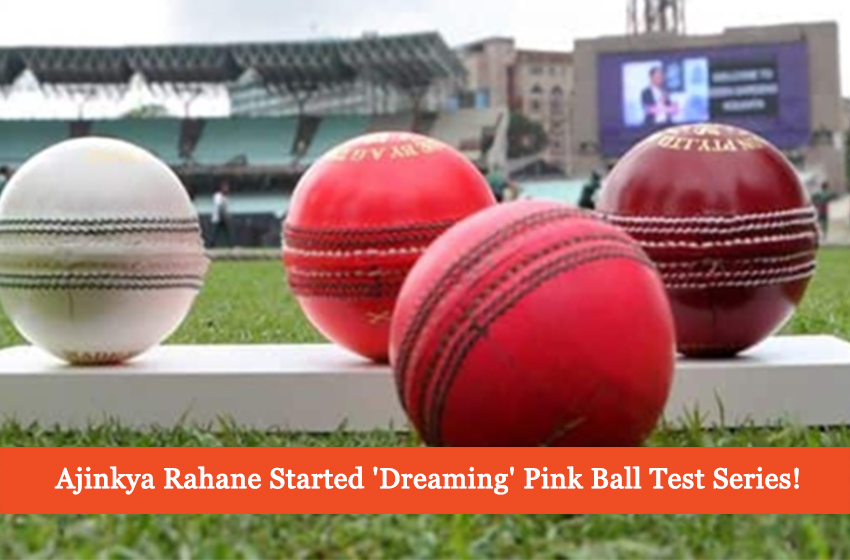 Since the evolution of the cricket game, the format has changed several times depending on the circumstances. Certainly, the cricket craze is yet again wide awake in India as its national cricket team is ready for their upcoming day-night face-off with Bangladesh. Regarding the new format, Indian cricketer Ajinkya Rahane recently, showed his excitement by ‘dreaming’ about the pink ball test series.

With time the Indian Cricket Team has nurtured its skills and now lies among the finest teams of the world. It is evident that after former team captain Mahindra Singh Dhoni, Virat Kohli is leading the Indian Cricket Team with pure sportsmanship. Among the viral news of the pink ball day-night test series against Bangladesh, India’s Ajinkya Rahane recently posted a ‘dreaming’ post on his Instagram.

Apparently, the Indian Test Vice-Captain displayed his enthusiasm towards the upcoming 24 hours battle with Bangladesh. Sleeping with a pink ball by his side, Ajinkya Rahane captioned, “Already dreaming about the historic pink ball test”. Reportedly, the first-ever pink ball day-night test series is scheduled to take place at the Eden Gardens stadium in Kolkata.

Well, as it is said good friends are indeed a blessing, Indian captain Virat Kohli and batsman Shikhar Dhawan made it sure. Soon after Ajinkya Rahane posted his intense love with the pink ball, his teammates took the trolling approach. While Dhawan targeted the reason behind the sleepy picture, Kohli appraised Rahane’s posture in the picture.

Particularly, this is not the first time cricketers have shown their brotherly bond with each other on social screens. Not only with his team, but Virat Kohli has also at times, displayed his respectable gesture towards the Pakistani cricketers. Previously, the Indian captain’s charitable gesture towards former Pakistani cricketer Shahid Afridi had taken the internet by storm.

“Kohli and Rahane are scheduled to land in the ‘city of joy’ at 9:40 am on Tuesday”!

However, regarding the upcoming pink ball test series in Kolkata, media reports are filled with Kohli and Rahane’s early arrival. Finally scheduled from 22nd November to 26th November, the Indian captain and vice-captain were due to reach the playing pitch earlier today. According to Indian media reports, “Kohli and Rahane are scheduled to land in the ‘city of joy’ at 9:40 am on Tuesday, much ahead of the rest of the team”.

Analyzing the less public interest in long test matches, the pink ball test series was decided by the higher authorities. Reportedly, the day-night test series decision was taken to regain the lost attention of cricket fans. However, the reason behind Virat Kohli and Ajinkya Rahane’s early visit to the Eden Gardens is to check the face-off pitch conditions.

What do you think of the pink ball test series? Let us know in the comments section below!