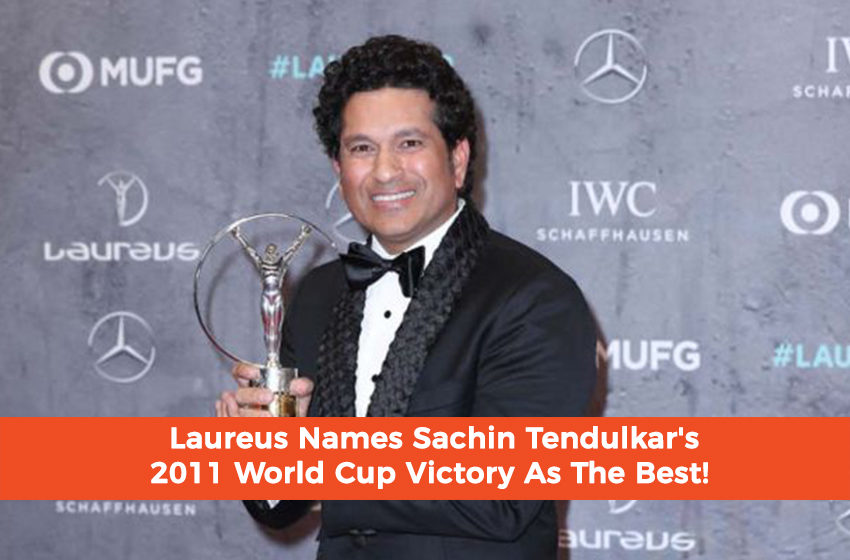 The Laureus World Sports Awards for the year 2020 have just happened. This year the Laureus award for the best sporting moment was claimed by the very own Sachin Tendulkar.

The former cricketer was nominated for the Laureus best sporting moment within 20 years. With the Indian fans to support him all the way, Sachin, took the trophy home on Monday.

With India on the verge of winning, Sachin realized that it was his moment to lift the trophy of the 2011 ICC World Cup. The 2011 World Cup was Tendulkar’s sixth and last World Cup. However, his dream turned true when skipper Mahendra Singh Dhoni went on hitting a sixer straight out of the park. The bowler who got bashed out was Sri Lankan pacer Nuwan Kulasekara.

With that, the winning moment got seized by the Indian team. Moreover, Indian cricketers came out running from the racks and soon they lifted Tendulkar on their shoulders. The latter then created a historic moment by making the lap of honor.

With the  Laureus award in his hands, Sachin Tendulkar revives his 2011 World Cup moments on the very stage. “It’s incredible. The feeling of winning the world cup was beyond what words can express. How many times you get an event happening where there are no mixed opinions. Very rarely the entire country celebrates,” addressed Tendulkar.
Moreover, he added: “And this is a reminder of how powerful a sport is and what magic it does to our lives. Even now when I watch that it has stayed with me.”

In the speech, he shares his childhood journey and the hurdles that he had to overcome. Moreover, the highest run-getter in the cricket world also sheds light on the fact that how blessed he feels to lift the prestigious trophy. Sachin told the audience that his childhood inspiration had come from the revolutionary leader Nelson Mandela. He had met Mandela when he was just 19 years old. Subsequently, Mandela’s message of using sports to unite people has been Tendulkar’s motto.

Last but not Least, Sachin Tendulkar posted a tweet, in which he claimed to dedicate his Laureus award to his country, teammates, and fans. “Thank you all for the overwhelming love and support! I dedicate this Laureus Sport award to India, all my teammates, fans and well-wishers in India and across the world who have always supported Indian cricket.” he tweeted.

Thank you all for the overwhelming love and support!

I dedicate this @LaureusSport award to India 🇮🇳, all my teammates, fans and well wishers in India and across the world who have always supported Indian cricket.#SportUnitesUs #Laureus20 #SportForGood pic.twitter.com/wiqx0D9e2E