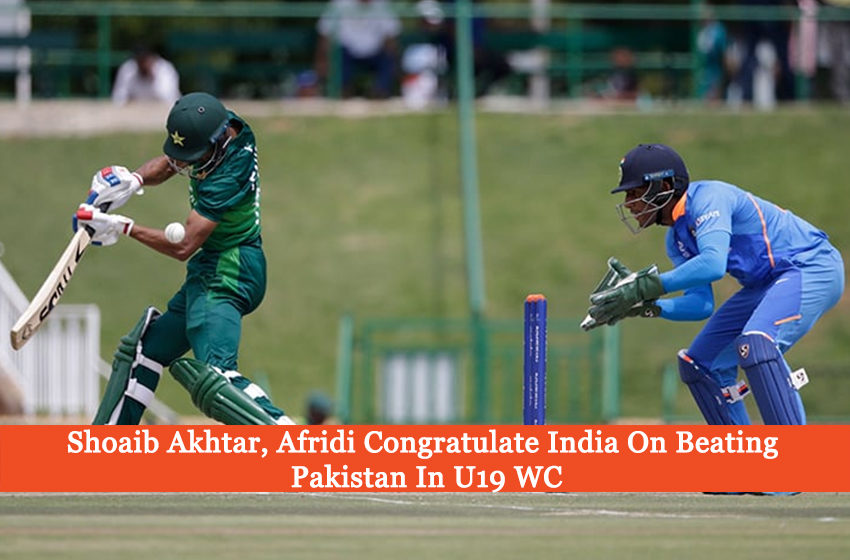 Many had predicted the game to be a tough encounter, however, it was India that stood strong and resilient. The colts in Blue were able to subdue their Green counterparts, winning the match by a comfortable margin.

India went on to beat Pakistan by 10 wickets. The Pakistani side was outplayed in all three departments; batting, bowling, and fielding. Soon after the game was over, the young colts from India garnered a lot of praise and positive response from stakeholders of the game.

Moreover, unprecedentedly, two Pakistani cricketing greats were on the parade as well. The Rawalpindi Express, one of the world’s fastest bowlers, Shoaib Akhtar made a video after the match. The video saw him congratulating the U19 World Cup Indian side after the India vs Pakistan match.

Akhtar significantly praised Yashasvi Jaiswal for his sublime performance in the game. Akhtar, who has almost 2 million subscribers on Youtube, gave motivation to the Pakistani youngsters as well. He said that you must not feel bad for the loss, and work on your mistakes. Moreover, Akhtar was the only Pakistani to be featured in Youtube’s Rewind 2019.

As for the Indian team, Akhtar said that it was evident that the future of Indian cricket was in good hands. In addition, he stated that the BCCI had a fool-proof plan which they executed well. From their academies to the start of the IPL, everything went perfectly.

This is the reason why the Indian U19 World Cup team looks so dangerous and was able to overpower Pakistan so easily. In conclusion, Akhtar talked about the steps Pakistan needed to take to secure the country’s cricketing future.

On the other hand, Lala, Shahid Afridi made his voice public as well. The former Pakistani captain took to Twitter to congratulate the young Indian side on their landslide victory.

“Congrats to the Indian U19 on a clinical performance today. The Crkt system in India is producing top-class cricketers at all levels. Pakistani youngsters shouldn’t lose ❤️, a big learning curve today. Players like Haider, Hurraira, Rohail, Haris, Qasim, and the fast bowlers have a lot of potentials,” tweeted Shahid Afridi.

Congrats to 🇮🇳 U19 on a clinical performance today. The Crkt system in🇮🇳 is producing top-class cricketers at all levels.🇵🇰youngsters shouldn't lose ❤️, a big learning curve today.Players like Haider, Hurraira, Rohail, Haris, Qasim and the fast bowlers have a lot of potential.

Lala congratulated India on their ‘clinical’ performance in the India vs Pakistan U19 world cup match and lauded the system for producing world-class players who are young but solid. Furthermore, Shahid Afridi pointed out the need for learning for the Pakistan side.

He pointed out young talents like Haider, Hurraira, Rohail, Haris, Qasim and all the fast bowlers in the Pakistani side with potential. Moreover, for two Pakistani greats to appreciate a young Indian side goes a long way.

Even though Pakistan and India remain daggers drawn at each other, veterans of the game need to de-politicize it. However, the same emotions are rarely seen from this side of the border.

India has successfully sealed their spot in the U19 World Cup final and will play the winners of the Bangladesh vs New Zealand game.