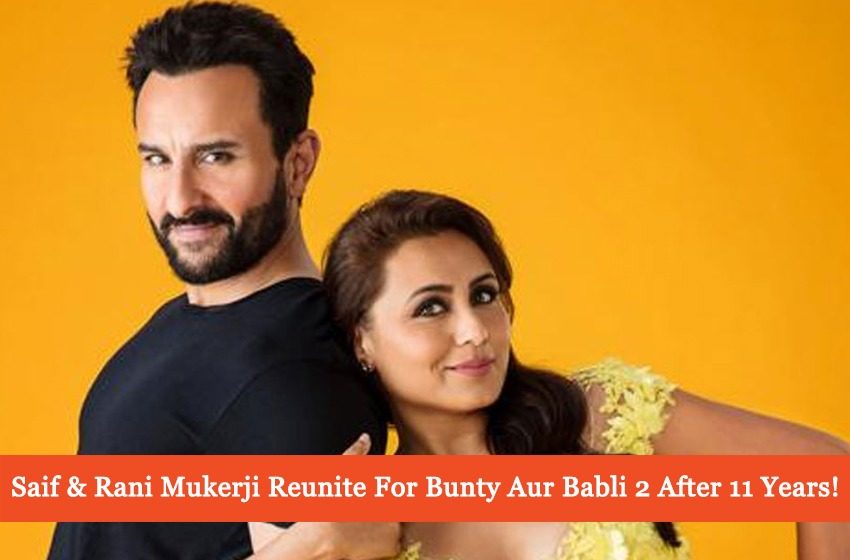 Bollywood is on a marathon run, producing a series of movies back to back. From Panipat, Pati Patni Aur Wo, Tanaaji, Street Dancer 3D and now, a sequel of 2005’s Bunty and Babli; Bunty Aur Babli 2. The 2005 movie included Amitabh Bachchan, Abhishek Bachchan, and Rani Mukerji. The movie was a hit and now fast forward to 2019, it has become a classic.

The cast of the movie is starring Rani Mukerji and Saif Ali Khan – The Hum Tum couple after 11 years. Their reunion will definitely bring back great memories of Hum Tum (2004), Ta Ra Rum Pum (2007) and Thoda Pyaar Thoda Magic (2008).  Every movie performed well and is fun to re-watch, even after so many years. The 2000s and the ’90s were definitely the golden eras of Bollywood.

#BreakingNews : Saif Ali Khan and Rani Mukerji bring their magic back in #BuntyAurBabli2. Excited about it – Yes or No?

Just looking at the picture above must have made most of you sing the iconic song, “Ladki kyon na jaane kyon ladkon si nahin hoti?” from Hum Tum. Now, they are both going to bring their magic back, which is quite exciting as they are well into their 40’s with a fantastic acting career behind them – Gurus, you can say.

But they will not star as Bunty and Babli themselves. Those main leads are entirely different from the original. They are young, freshies and famous.

Siddhant Chaturvedi from Gully Boy and Sharvani, a new actress who will debut in this sequel. Siddhant was a debutant in Gully Boy and his impressive performance earned him the spotlight.

The mystery leading lady, however, has yet to showcase her acting skills in the movie. Both of these two actors were announced on December 17th.

Abhishek was to appear in Saif’s stead.

Apparently the original actor who played Bunty, Abhishek was asked to re-appear for the sequel but he couldn’t be available for the movie. Rani said that she would miss him dearly.

#Rani’s official statement on #AbhishekBachchan and #BuntyAurBabli2: “#Abhishek and I were both approached by #YRF to reprise our roles as the originals in #BuntyAurBabli2 but, unfortunately, things didn’t work out with him and we will miss him dearly.”

Varun Sharma is the director and the writer for this movie. Moreover, Aditya Chopra is producing it.

Speaking about the movie, Varun said, “Bunty Aur Babli 2 is completely set in today’s time. Siddhant caught everyone’s eye with his brilliant acting debut in Gully Boy and became the heartthrob of the nation. We are very excited to have him play the role of Bunty. He is a superb actor, is extremely charming and he fits the role perfectly.”

Recently the trailer of India cinema’s one of the biggest dance film Street Dancer 3D didn’t disappoint and lived up the hype. We hope Bunty Aur Babli 2 will follow suit and the trailer will be as good as the news of Rani and Saif returning.