Liger, a movie starring Vijay Deverakonda, has received a mixed reception internationally since its premiere. The movie didn’t bring in the estimated audience size. However, given that it has made the anticipated 5 crore, it is still performing better with Hindi filmgoers. Ananya Panday has been highly ridiculed for her acting abilities, and many have said that she isn’t heroine material and that directors should stop casting her while everyone is praising Vijay’s performance in the movie and criticizing her. 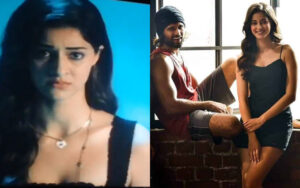 Ananya Panday has been the target of trolling before. She frequently attracts attention from online users for a variety of reasons. When Chunky Panday’s daughter made her acting debut in Student of the Year 2 by Karan Johar, she was likewise referred to as a “product of nepotism.”