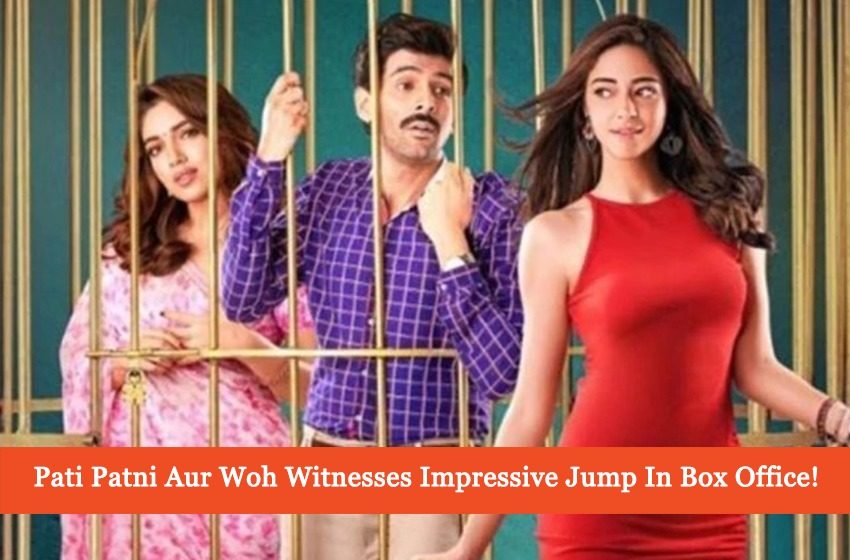 The much-awaited film Pati Patni Aur Woh finally hits the screen and bags a whopping Rs 9.10 Crore on its opening day alone. The film including one of the most sought-out Bollywood actors Kartik Aaryan, was already making waves before its release. Its hit song, a spinoff of ‘Ankiyon sey goli maray‘ iconic song, made it among the top favorites of many. Of course, one can call it the ‘Kartik Effect’, as no movie of this actor has ever performed poorly.

On its second day on the screens, it still continued to gain momentum.

Film critic and trade analyst Taran Adarsh also lauded the excellent performance of Pati Patni Aur Woh’s second day in a row. He informed how the film has dominated all audiences, young, old and families alike. In addition, taking over markets too.

However, the film received mixed reviews with critics not too happy with a storyline involving infidelity. Fortunately, it still managed to perform well. More so, the main factor involving the movie clashing with Arjun Kapoor and Kriti Sanon’s Panipat. Panipat is another mega project releasing at the same time. The rom-com managed to stand on its own.

On the 7th of December, Mudassir Aziz being the director made Rs. 12.33 Crore. This makes the total to Rs. 21.43 Crore; which is a hefty amount considering the release of this movie spanning to two days only. Which in turn, only shows that the movie will continue to soar and add to the large sum already produced.

This movie’s hit has become the pinnacle of career for actor Kartik Aaryan. This movie has become Kartik’s biggest opener. Previously, his last movie ‘Luka Chuppi‘ made Rs 8.01 crore on its opening day. Call it his lucky streak or simply gifted, Kartik became the first Indian Bollywood actor to have his own customized Instagram filter. He is surely on his way to the top through a fast track.

On its third day, it collected a total of  35.94 Crore, since its release!

A movie you can truly enjoy without having to notice the hidden double meanings of any sort.

The best way to refresh your mind is by watching a light hearted feel good entertainer. The sort of film where u don't have to worry about hidden agendas or fake claims of truth. Writer director @mudassar_as_is ' #PatiPatniAurWoh is that sort of film that made me hav a grt time!

An unbiased and thorough review. “performances, Dialogues and Kartik-Aparshakti’s crazy banters are the highlights”

It offers exactly what the trailer had promised i.e ENTERTAINMENT! Performances, Dialogues and Kartik-Aparshakti's crazy banters are the highlights. Despite some contrivances the above factors manage to keep you engaged till climax.
Rating: ⭐️⭐️⭐️ pic.twitter.com/EIix3akpf6

So far most of the reviews are in favor.

Any small town based Bollywood movie is incomplete without multiple SRK references, that's his impact even after a lean patch.Main Hoon Na sequences are genuinely funny. 😂 #PatiPatniAurWoh

A 6 out of 10. The ratings managed to make it a box-office-hit, so we will take the “almost good” rating.

#PatiPatniAurWoh is a Pure Fun Film. Interesting script and Humourous Dialogues bring lot of laughters. It is one of those rare film where all 3 characters are superbly written and have equal weightage. Mudassar Aziz deserves all the critical and commercial success.
Rating- 6/10* pic.twitter.com/uUnV9Uut75

‘Random Guy’ approved. Story not new but has a good amount of freshness to the old concept, says this user.

#PatiPatniAurWoh comes under ROM COM genre with lots f fun in it.Story isn't something spcl and has been seen b4 in other movies.But there is freshness in the whole making and that makes it a gud watch!Those who want to spend some good time laughing throughout, go grab a ticket👍 pic.twitter.com/sWuFBt2NMP

Emotional scenes were lacking but a good movie overall, says one.

The movie has earned all three leads a plethora of praises. Bhumi Pednekar didn’t disappoint the Indian audience with her exceptional acting skills. In addition, Kartik wasn’t left behind either and was praised heavily. The movie as a whole did great! Be it in terms of storyline, direction, production, actor’s deliverance and as a whole. Painpat’s release definitely didn’t hinder this box office hit.