A Farmer Father In Rajasthan Sends Off His Newly Wed Daughter In A Helicopter! 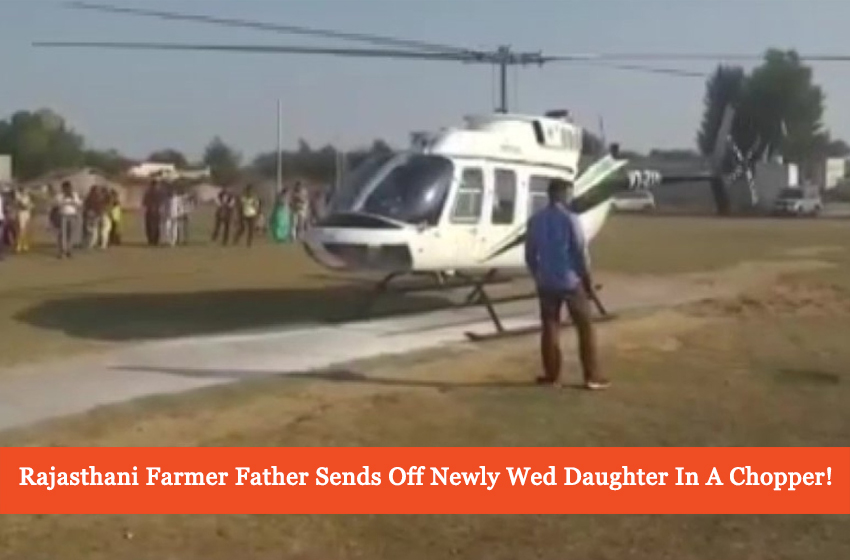 Phrases like ‘daddy’s little girl’ and ‘papa ki princess’ exist for a reason. Since daughters rule their father’s hearts and their pockets; fathers dote on their girls and try to fulfill all of their wishes, demands, and requests. This is the beauty of this relationship. It’s a universal sense of affection that fathers develop upon the birth of their daughters; the strong sentiments of protection, adoration and spoiling their daughters are free of any religion, caste, creed or culture.

Indian father sends off his daughter to her in-laws in a chopper; fulfilling her dream of flying in an aircraft.

A humble farmer Mahendra Singh belonging from a village Jhunjhunu, Rajasthan remembered his daughter Reena often asking her father who worked abroad for many years that, “You have been coming and going in plane. When shall I fly in a plane and travel in sky.”

The doting father made sure to make her daughter’s childhood dream a reality years later on her wedding day. He arranged a helicopter in Ajitpura village. Moreover, got all the necessary permissions from the administration. Mahendra, like any loving and caring father, did his best to fulfill all of his daughter’s dreams, however, this remained. Now, he successfully executed his plans which were already in the works a year prior to her big day.

Mahendra proudly said, “I planned this a year back and shared the idea with my family when the wedding was 2 months away”

The big send-off in pictures.

Jhunjhunu: Departure of a bride, Reena after her marriage was on a helicopter arranged by her father in Ajitpura village. Mahendra Solakh, bride's father says,"I planned this a year back and shared the idea with my family when the wedding was 2 months away." (21.11) #Rajasthan. pic.twitter.com/zRhDmHrNFD

The happy bride invited all of her friends to witness the spectacle. The bride ascended from Ajeetpur and landed at Sultana, the place of her in-laws, leaving the relatives and villagers stunned and amused. Reena’s departure and the wedding had so many sentimental values attached, including the genuine intentions of a good father. Unlike the wedding of Mukesh Ambani, which didn’t lack in extravagance but fell short to deliver the raw emotions of the immediate families.

A user considers this gesture of Mahendra’s, heart touching and a nice change in a society that prefers sons over daughters.

It speaks how he loves his daughter so deeply. Let us love girl child our sweet daughters. Be proud of them. A nice message to society where people love sons more than daughters and even dislike birth of girl child.

“It speaks how he loves his daughter so deeply. Let us love girl child our sweet daughters. Be proud of them. A nice message to society where people love sons more than daughters and even dislike birth of girl child”

These words are a cold reality in India. To date, the country progresses in various areas including Tech and IT, however, it fails to consider daughters as equals to their sons. Further, they are considered a liability and are shunned on the day they are born. In most areas, their birth is met with sympathies for the father by relatives and others. However, there is still hope in a village called Piplantri, situated in Rajasthan. This village has revolutionized the dated concept of daughters being a burden, to them becoming a strength of not just their families but of the village as well.

Mahendra Singh and Shyam Sundar Paliwal are setting examples of how daughters should be treated. Hopefully, these amazing stories will change the perception of millions across India.

What are your thoughts on this story? Commented below!