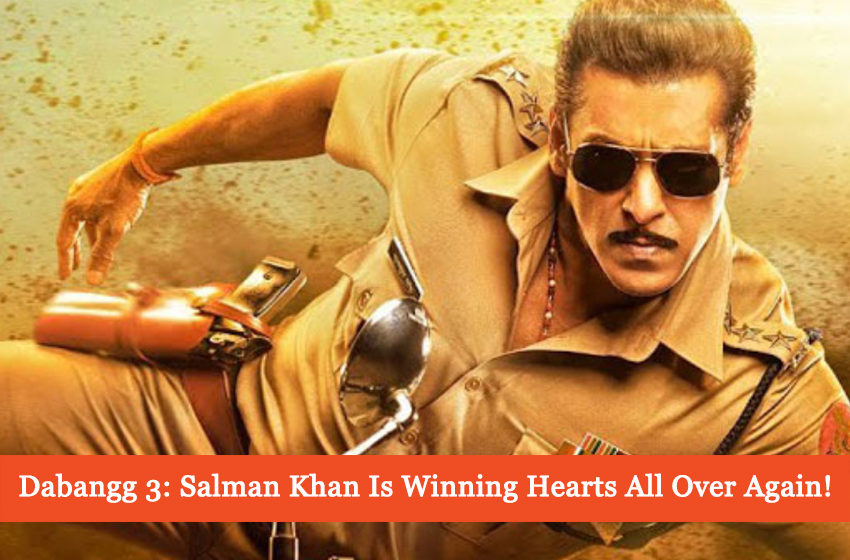 It won’t be wrong to say that the Khan’s of Bollywood have always been at the top tier of the Indian film industry. From Aamir Khan’s mindful creations to Salman Khan giving back to back hits and then the romantic hero Shah Rukh Khan, Bollywood has it all. Well, as expected, Salman Khan’s ‘Dabangg 3’ has once again made fans crazy after its official release today.

Undoubtedly, Bollywood’s ‘Bhai’ and his cop avatar has been entertaining cinema lovers since Dabangg‘s first release back in 2010. While the actor’s former sister-in-law Malaika Arora is busy responding to online trolls, Salman Khan being lauded. Earlier today, Salman Khan’s ‘Dabangg 3’ hit the theatres and currently, fans are expressing their thrilling experience on social media.

Check out the massively watched trailer of ‘Dabangg 3’!

Apparently, the funky, the funny Chulbul Pandey exceptionally played by actor Salman Khan has movie lovers amazed. To keep the continuity of the story strong, the lead cast of ‘Dabangg 3’ has the same actors with some other additions. Other than Salman Khan, the cast includes Sonakshi Sinha, Arbaaz Khan, the newly added Saiee Manjrekar and Tollywood actor Sudeep.

Certainly, there is no doubt in Salman Khan’s massive fan following and it was completely evident after ‘Dabangg 3’ got released. All the die-hard admirers of the actor ran towards the cinema theatres to catch the first day, first show. Well, the lucky ones who gained success in watching the film in a full house, took to Twitter to provide their appreciating feedback.

Here comes an appreciation post for the newcomer Saiee Manjrekar!

Saiee’s raw talent and innocence fits in well with #SalmanKhan’s larger than life persona. #Dabangg3 is a true entertainer and @BeingSalmanKhan epic comic timing is commendable.

Ratings have started pouring in!

#Dabangg3 is massively entertaining, funny and awesome at its comic timing! But somewhere it lacks the #Dabangg element! Tighter edit and screenplay could've made the film much more interesting! Salman Khan rocks in and as Dabangg and Dhaakad in fights!
My Ratings: 🌟 🌟 🌟

As of now, it seems like Salman Khan’s charming personality has yet again satisfied the audience’s entertainment needs. With a total of more than 50 million views on the official trailer of ‘Dabangg 3’ on YouTube, it is still going strong. Despite the recent uproar in India regarding the approved Citizenship Amendment Bill (CAB), the film might incur some financial instability.

Are you excited about Salman Khan’s ‘Dabangg 3’? Let us know in the comments section below!