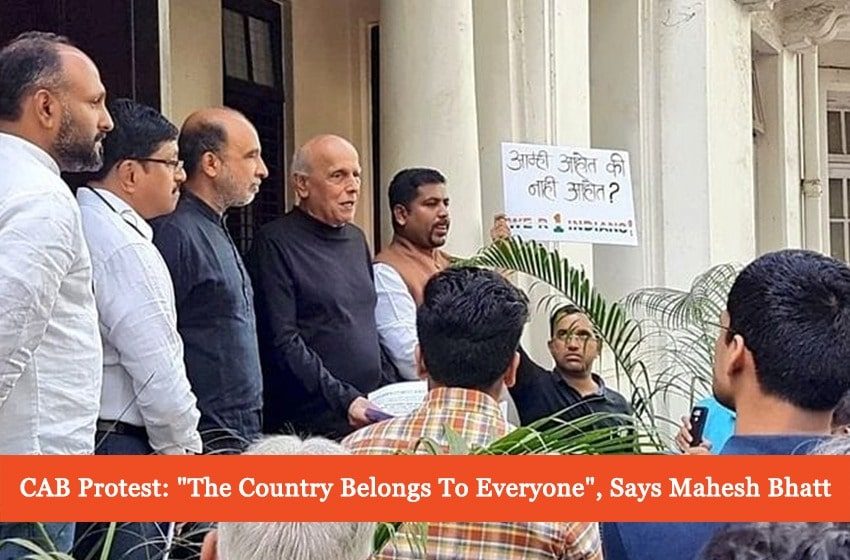 Recently, the Indian government under Prime Minister Narendra Modi’s leadership has opted for a much severe stance. Since the Citizenship Amendment Bill (CAB) made world Muslims fierce, a few famous Bollywood personalities are moving in the ‘just’ direction. On the anti-Muslim agenda implemented, filmmaker Mahesh Bhatt earlier joined a protest held against the approved CAB bill.

Passed by the Lok Sabha and Rajiya Sabha, the Citizenship Amendment Bill (CAB) has now become an official Indian act. Calling out the humiliating decision, currently, Muslims globally are on the verge of canceling Indian celebrities for supporting it. Last Sunday, the veteran filmmaker Mahesh Bhatt showed his support with the protestors after rejecting the Indian government’s CAB bill.

Check out what the filmmaker posted on his official Twitter!

We the people of India , having solemnly resolved to constitute India into a SOVEREIGN SOCIALIST SECULAR DEMOCRATIC REPUBLIC.( At Ambedkar’s abode . After reading the Preamble of our Constitution.) ⁦@ShashiTharoor⁩ ⁦@JhaSanjay⁩ ⁦@mathewmantony⁩ pic.twitter.com/OsFoagg3PI

Apparently, it isn’t the first time, the director is seen supporting the right side to portray the ‘humanity’ message around. After studying the preamble of the constitution, the filmmaker posted on his Twitter, “We the people of India, having solemnly resolved to constitute India into a SOVEREIGN SOCIALIST SECULAR DEMOCRATIC REPUBLIC. (At Ambedkar’s abode. After reading the Preamble of our Constitution)”.

According to media reports, Bhatt joined the protest along with the Congress Party leader Sanjay Jha on Sunday in Mumbai. Talking about the implemented decision, Mahesh Bhatt stated, “We believe Citizenship Amendment Bill is discriminatory and it violates the constitutional values. We don’t accept this bill and if it becomes a law we shall boycott its execution”.

“We pledge not to submit any documents if asked to prove our citizenship”, he further added. As per Indian media reports, massive protests broke out throughout the country after the Citizenship Amendment Bill (CAB) got approved. Unfortunately, the ongoing protest against Lok Sabha’s decision has now turned towards a much violent stance.

The chaos spread after the protests turned violent!

As the local police have intervened into the peaceful protests, many innocent Muslim lives are now at stake. The news of several buses being burnt down in Delhi is also circulating on social mediums. However, the CAB act will provide Indian nationalities to several foreign migrants who are willing to be a part of India, excluding Muslims.

Undoubtedly, the hate, vicious Modi carries against the Muslims is now more evident for the world to see. Well, along with others not supporting the bill, Pakistan’s DG ISPR Asif Ghafoor also ‘labeled’ the protests as the beginning of India’s end. As of now, Mahesh Bhatt’s video chairing the Mumbai protest is getting praised by the Muslims on the internet.

What do you think of Mahesh Bhatt’s stance? Write to us in the comments section below!