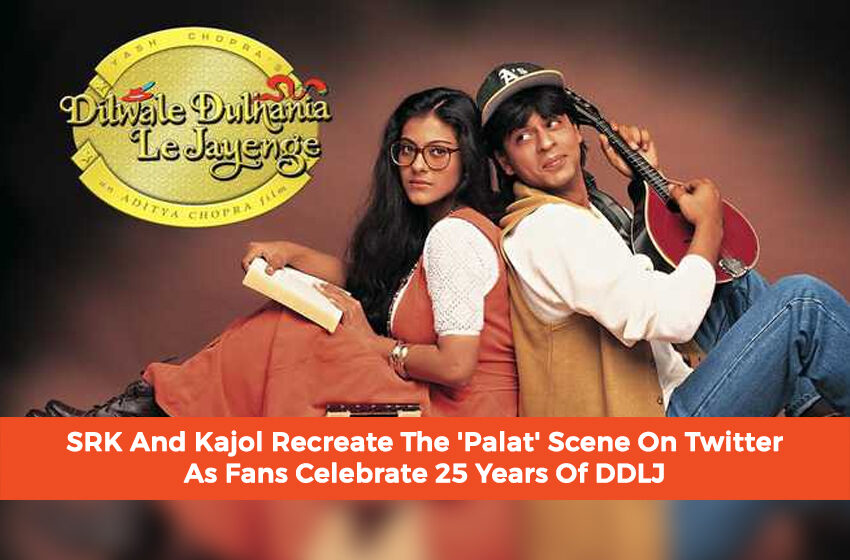 October 20 is a very special day for the fans of Shah Rukh Khan (SRK) and Kajol. This is because their blockbuster film Dilwale Dulhania Le Jayenge was released on this very day 25 years ago. The film established the SRK and Kajol duo as an example of classic Bollywood romance. It seems like that even after 25 years of DDLJ release, nothing has changed.

SRK and Kajol began their day by changing their social media profile photos to their onscreen characters from DDLJ.

Apart from changing their profile pictures, they also recreated the iconic ‘palat’ scene on Twitter. It began with Yash Raj Films’ tweet, which tagged SRK and Kajol to share a rehashed dialogue from the film: “Raj, agar Simran tujhe pyaar karti hai toh woh palat kar dekhegi (If Simran loves you, she will turn and look at you).”

Replying to the tweet, Shah Rukh Khan continued the dialogue, originally spoken by his character Raj in the movie: “Palat… palat… palat…“

Raj and Simran fell in love after their chance meeting in Europe. This palat scene took place when it was finally time for Raj and Simran to part ways. Many fans consider it to be among the best DDLJ scenes.

Kajol further added on 25 years of DDLJ: “Raj and Simran! 2 people, 1 film, 25 years and the love doesn’t stop coming in. I am truly grateful to all the people who made it what it is today… a phenomenon and a part of their own history. The fans! Big shout-out to all of you!”

I am truly grateful to all the people who made it what it is today.. a phenomenon and a part of their own history. The fans! Big shoutout to all of you♥️#25YearsOfDDLJ @yrf@iamsrk #AdityaChopra pic.twitter.com/ikkKFef6F1

Earlier this week, Leicester Square did announce on their Twitter account that they will unveil a bronze statue of SRK alongside Kajol in Spring 2021. This will be the first ever Bollywood statue in the UK.

We're thrilled to reveal the next statue to join #ScenesInTheSquare. The King of Bollywood himself, Shah Rukh Khan and co-star Kajol, will be unveiled in Spring 2021, with what will be the first ever Bollywood statue erected in the UK. https://t.co/opqjWbiLku pic.twitter.com/DCIW1V3Kfm

The statue will also shine a spotlight on two Bollywood megastars from DDLJ. The Leicester Square location fits fantastically as the home of the new statue. It was a back-drop to a scene in the movie when Raj and Simran first cross paths, albeit unbeknown to one another.

Showing two of Leicester Square’s iconic cinemas, Raj stands in front of Vue West End Cinema. On the other hand, Simran is seen walking past the ODEON Luxe Leicester Square. The new statue will be positioned outside the ODEON cinema honoring the nostalgic moment in the movie.