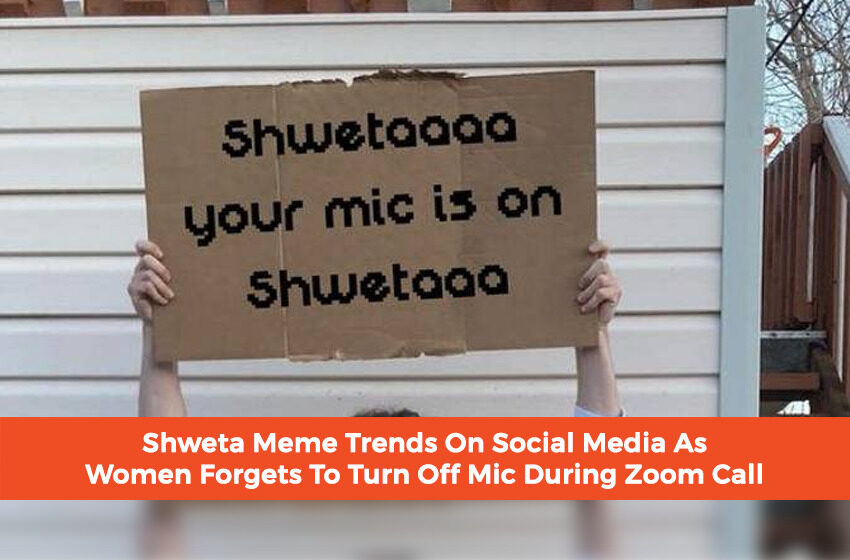 One of the biggest trends across all social media platforms, even ahead of #IPLAuction or #PetrolPriceHike on Twitter, is the Shweta zoom call in which her mic was on which gave rise to meme. From memes to spoof videos, the internet cannot have enough of Shweta and her conversation.

The hashtag #Shweta trended for hours on Twitter after a recording of the call between the eponymous woman with her friend Radhika went viral on the microblogging website.

In a leaked Zoom call of an online class, a girl by the name of Shweta forgot to mute her mic. What followed after that was the going viral of her individual conversation with one of her friends.

The other students were consistently reminding Shweta to mute her mic, she kept spilling the tea. Moreover, Shweta also shared some of the private details of one of her guy friends. “Usne ye apne best friend ko bhi nahi bataya”, said Shweta at one point. As a reply, another student said, “Ab ye 111 logo ko pata chal gaya hai”.

Take a look at the viral video:

The story of the Shweta zoom call in which her mic was on does not end here, it gave rise to a meme trend. This is because what followed the leaked conversation on a Zoom meeting was the meme fest triggered on social media. Here are some of the memes:

#Shweta #shwetayourmicison
*Meanwhile Every Other Participants in the Meeting* pic.twitter.com/lsJTdnz3Yx

#Shweta talking to radhika on conference call with 111 others

But their inner feeling while listening to the conversation😂 pic.twitter.com/lmjOgF7nPE

Big Boss: Our Show is number one reality tv show in India

Shweta’s zoom call is not the only incident that has gone viral on social media. As zoom calls and online conversations/meetings have become the norm, there have been many instances when social media memes have arisen from online calls.

Recently, an American lawyer experienced a hilarious mishap when he used his assistant’s computer for a virtual court hearing.

What do you think of this video? Let us know in the comments section below!