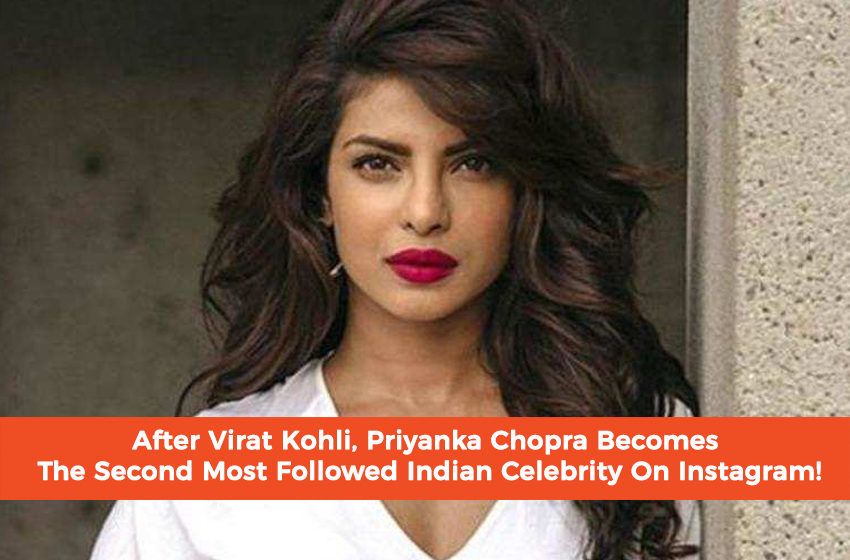 With Virat Kohli making strides in the world of international cricket and being the most-followed Indian on Instagram. Priyanka Chopra is no less behind, as she makes it to the second number on the list of Indian celebrities having the most followers on instagram.

Former Miss World, Priyanka Chopra is well known for her versatile acting career. The actress made her Bollywood cinematic debut with The Hero: Love Story of a Spy (2003). Later, she went on staring in some of the best hit films in the history of Bollywood cinema. Listing a few are Dostana, Kaminey (2009), 7 Khoon Maaf (2011), Barfi! (2012), Mary Kom (2014), and Bajirao Mastani (2015).

Her acting career is not limited to Bollywood, as she has also made her name in Hollywood movies. Some of her hit works are thriller series Quantico, comedy movie Baywatch (2017), and Isn’t It Romantic (2019).

Nonetheless, the artist has been a recipient of many awards. Whether it be national awards or international ones. In 2016, the Government of India bestowed her with the Padma Shri. Time magazine listed her as one of the 100 most influential people in the world. Moreover, Forbes listed her among the World’s 100 Most Powerful Women. With that, she also made appearances at international fashion shows like MET GALA, New York Fashion Week, etc.

Her accomplishments do not end yet, as UNICEF appointed her as their goodwill ambassador from the time period of 2010 to 2016. During this time period, she raised her voice for children’s rights, gender equality, and feminism.

With her splendid acting career, Priyanka Chopra has garnered a lot of fans and followers on social media, especially on instagram. Nevertheless, the actress recently achieved the milestone of surpassing 50 million followers on Instagram. Besides Virat Kohli, the actress has made her name to the 2019 ‘Instagram Rich List’.

However, the top of the list position has always been secured by Celebrity makeup artist Kylie Jenner, this time with a net worth of $1,266,000