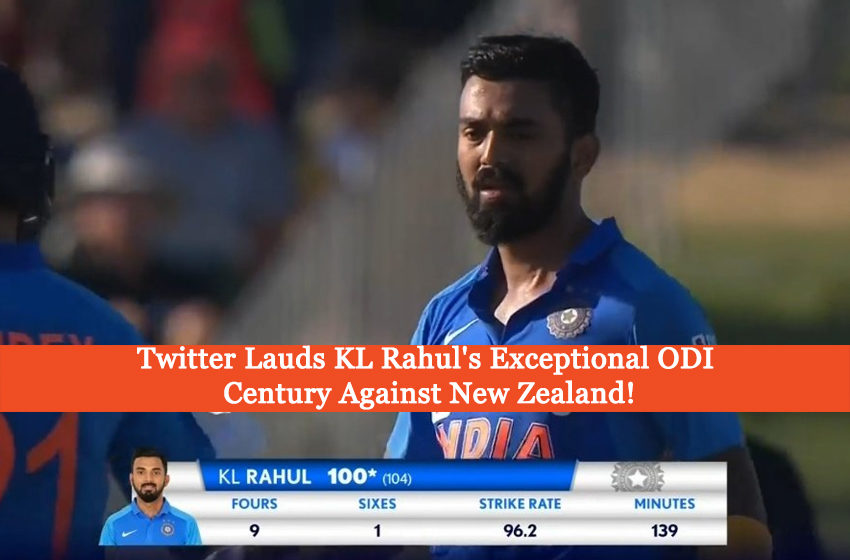 Considered to be one of the best cricketing squads internationally, the Indian cricket team was recently in New Zealand for a series. Ending in India’s defeat, the 5-match One Day International (ODI) series turned out to be a disaster for Indian fans. Nevertheless, the scintillating ODI century of wicketkeeper/batsman Kannanur Lokesh (KL) Rahul against the hosts stirred a wave of appreciation on social media.

The odds were in New Zealand’s favor as the Indian batting line was seen struggling hard to cover the wickets. The last match of the 5-day tour took place in Bay Oval cricket ground in Mount Maunganui, Tauranga city of New Zealand. Coming in at fifth, KL Rahul scored an exceptional ODI century against New Zealand after the loss of three important wickets.

New Zealand have aided India's recovery by missing a couple of run out chances.#NZvIND pic.twitter.com/kRlLFLQbtJ

The talented Indian batsman KL Rahul had three centuries to his name in formats, other than One Day International (ODI). As per the reported details, on Tuesday, India fought its tour’s last ODI battle against New Zealand. The series concluded with the hosts’ clean sweeping the series by 3-0 against India in the third, last, ODI match.

Virat Kohli struggling at the pitch!

Certainly, the failing top-order batsmen had built up quite a pressure on the Indian side before KL Rahul took charge. According to Indian media reports, the national openers Prithvi Shaw and Mayank Agarwal got bowled early. However, on captain Virat Kohli’s entry at third, the fans were a bit relieved but unexpectedly, he also couldn’t save the drowning boat.

After Virat Kohli was sent back to the pavilion, India’s Shreyas Iyer partnered up with Prithvi Shaw which earned a total of 62 runs. Eventually, Shaw’s wrong angle cost him his wicket which then brought the ‘run machine’ KL Rahul. Starting from 62, Rahul then scored his knocking fourth century (all formats) and his first one in the ODI format.

Trying to rescue his team, KL Rahul’s entry in the thirteenth over benefited India’s scorecard by the end of the tournament. However, the exceptional performance of the Indian wicketkeeper garnered praises from his admirers on the internet.

7th 50+ score with 3 hundreds in last 12 ODI innings for KL Rahul, many doubted this man's ability and inclusion in team but he's currently the most consistent guy in both the formats for India. The best part was he proved himself at every given position!

Will you open?
Possible to bat at 4?
Can you keep?
Can you please be our finisher?
Can you also lead today?
Naam Ek…Kaam Anek.
Kamaal Lajawaab Rahul ☺️🤗 #NZvInd

Brilliant from @klrahul11 what a series he is having. Will be sad that he will come back and not be there for Tests. Missed opportunity @cricketaakash @vikrantgupta73

What do you think of KL Rahul’s ODI century? Let us know in the comments section below!