Tesla's Cybertruck Garnered 1.87 Lakh Orders Within 4 Days Of Its Unveil! 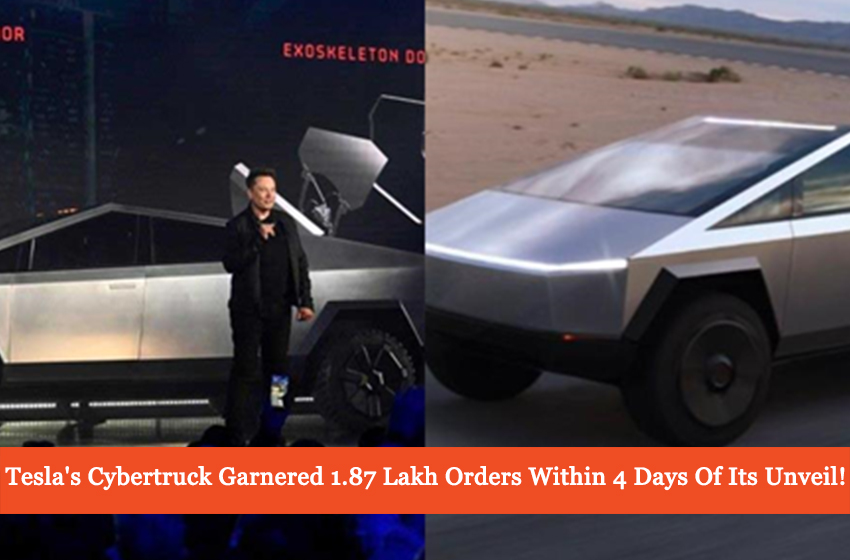 Elon Musk and his futuristic visions have made Tesla what it is today. The eccentric personality that he is, surely has a neck for innovation. There was a time when the fuel consumption of our vehicles had negatively influenced global warming.

In order to remedy that Elon Musk came up with a breakthrough in the vehicle industry. Before his miraculous achievement, the electric car was a dream. All we had was hybrid cars that still used fuel to function.

In 2008 Tesla and Elon Musk managed to change all that. The introduction and the successful test run of the first electric car meant that the future was here. And Elon Musk was at the driving seat! literally!

After that, the world was his stage. Elon Musk the visionary had some very interesting plans to help humanity take that giant leap. His plans to venture into space, a territory unknown to humankind is not a hidden thing.

Elon Musk and Tesla’s drive for technological advancements was at full display recently when they unveiled the new Tesla Cybertruck. It has received a tremendous response from the buyers also. Only in 4 days, the vehicle has received 1.87 lakh orders.

Elon Musk in a glitzy ceremony unveiled the new Cybertruck on the wee hour of November 21st. The show was packed with technology geeks and car enthusiasts who were left literally bamboozled by the flawless design of this new vehicle. Tesla Cybertruck’s production is expected to begin in late 2020. The electric pickup truck is available in three variants. The single motor RWD, dual-motor AWD, and tri-motor AWD.

The whole of social media also went into a frenzy as Tesla’s Cybertruck became a top trend. The design of the Cybertruck also impressed many. Its immaculate look is very similar to an armored truck. It features an ultra-hard 30Xcold-rolled stainless-steel body and armored glass. The vehicle comes with an adaptive air suspension that can be raised and lowered four inches in either direction.

During the unveiling, however, there was a minor hiccup as the claims of it being an armored vehicle received a set back when during the testing its glass shattered. The blunder led to a plethora of memes. However, the gaffe did not prove to be that much of a roadblock as the car’s popularity surged through the roof. Only after 4 days of its unveiling, the people have booked the car in record numbers.

Celebrating the success and the exciting welcome the car received Elon Musk posted a tweet updating the world about the number of orders Tesla had received for the Cyber Truck is 187k, added by the percentage for each of the variants. The most preferred variants among the masses seemed to be the tri and dual variants which received 42% and 41% of the orders respectively. While the singular motor took a share of 17%. Tesla Cybertruck’s production is expected to begin in late 2020.