Saroj Khan Passes Away At 71: Six Iconic Songs By The Choreographer! 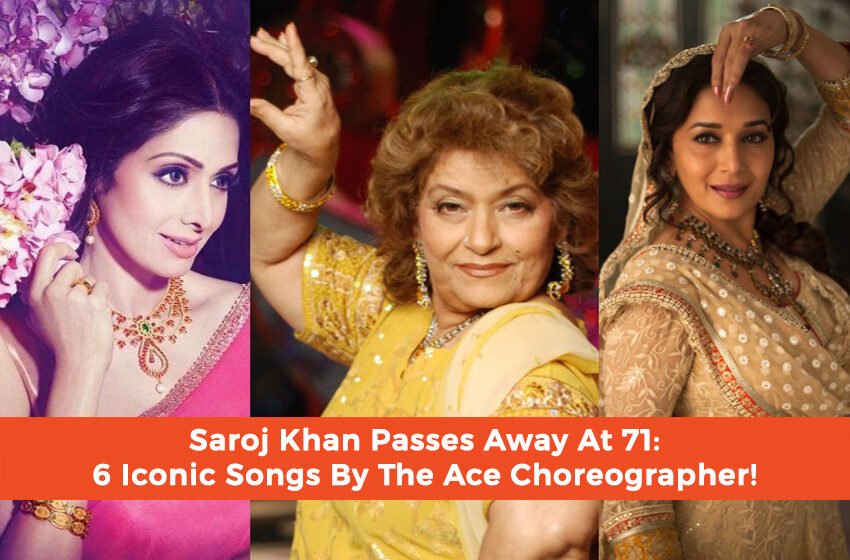 India’s national award winning choreographer Saroj Khan passed away from cardiac arrest on Friday 3rd July, 2020, around 1:52 am. She was 71. The ace choreographer was admitted to Guru Nanak Hospital at Bandra in Mumbai on June 17 after she had complained of breathing issues. Saroj Khan choreographed some of the most amazing songs for the Hindi cinema.

There is no doubt in the fact that Saroj Khan is one of the finest choreographers ever to come out of India.  In a career span of more than 40 years, Saroj Khan choreographed more than 2000 songs. She entered Bollywood at the age of 3 as a child artist with the film Nazarana. She worked as a background dancer till the 1960s. Saroj got her first break as an independent choreographer with Geeta Mera Naam in 1974.

Saroj Khan has choreographed several super hit songs. This includes Ek Do Teen, Dola Re, Nimbooda Nimbooda, Hawa Hawai, Tamma Tamma and many other famous songs. Here we will have a look at five of the most iconic songs of the legendary choreographer.

Saroj Khan trained Aishwarya Rai and Madhuri Dixit for Dola Re Dola song from the film Devdas. The signature step of this iconic song created a lot of buzz. Both the actresses wore heavy jewellery and sarees for this legendary dance number. These beautiful actors have certainly done total justice in their dance numbers.

Seen in a beautiful blue lehenga choli, Aishwarya Rai Bachchan really mastered the moves of this song from Hum Dil De Chuke Sanam. Apart from her dance moves, Aishwariya’s facial expressions too were spot on. As a result, the track still remains fresh in the memory of Bollywood fans.

The evergreen song Hawa Hawai was from the Blockbuster science fiction film Mr. India. The film was directed by Shekhar Kapur. It starred Anil Kapoor and Sridevi in lead roles. Pictured on Sridevi, this unforgettable song is still popular among Bollywood fans all across the world. Both Saroj Khan and Sridevi were at their absolute best here.

The film Thanedar did average business at the box office. However, the film will always be remembered for the brilliant dance steps of Sanjay Dutt and Madhuri Dixit in the song Tamma Tamma. Saroj Khan certainly deserves all credit for making this song all about her fluid dance moves.

The fact can’t be denied that Saroj Khan brought out the absolute best in Madhuri Dixit. The song Ek Do Teen from Tezaab is a prime example of how successful was the collaboration between Saroj and Madhuri. This high intensity dance song became a turning point of Madhuri’s illustrious career.