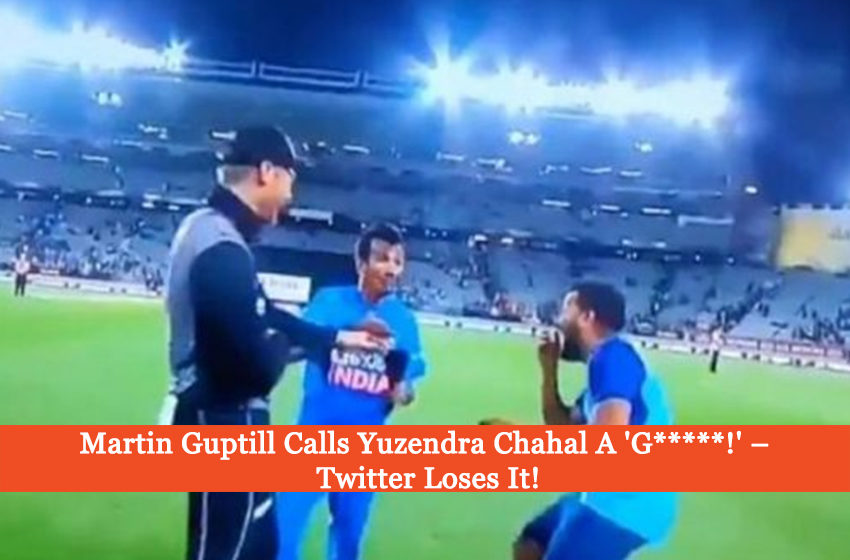 Celebrity blunders during live streaming have always been fascinating for the masses as the instant reactions are a never-ending dilemma. Apparently, after India’s recent win in the second T20 against New Zealand, celebrations and ‘cusses’ began. Amidst the celebratory mode, New Zealand’s opener Martin Guptill cussed Indian bowler Yuzvendra Chahal in Hindi and everyone noticed which made us catch some funny moments .

Normally, cricketers sharing a friendly bond with the opposers makes it to the news but this time things got a little out of ‘mouth’. Since Indian bowler, Yuzvendra Chahal runs his own channel ”Chahal TV’‘ as well, he tried to capture some winning moments. Amidst his recording session, Martin Guptill, on the field, called Yuzvendra Chahal ‘g****’ and Twitter has now lost it.

Check out the hilarious video!

Apparently, Yuzvendra Chahal is not only a skilled bowler but quite an entertainer as well which can be seen in his vlogs. From covering pre-match and post-match moments to speaking with fellow cricketers, ”Chahal TV’‘ has does it all. Recently, in the ongoing five-match T20 series against New Zealand, India celebrated its victory of the second battle in full swing.

In order to preserve those precious winning moments, Indian journalist Jatin Sapru headed towards the ground. While the journalist was busy talking with the winning team, Yuzvendra Chahal’s friendly abruption took a hilariously unexpected turn. Eventually, the Indian bowler’s ”What’s up guys?” was responded with New Zealand’s Martin Guptill with ”Aye g****” (in Hindi) gave us some funny moments to catch.

However, apart from the matches, teammates share a friendly bond with each other and this was such a moment captured. Taking as one, Yuzvendra Chahal and other Indian cricketers nearby responded to Martin Guptill with a good laugh enjoying those funny moments. Later, the captured video went viral on social media and netizens are putting together a lot of thoughts in making the scene way more hysterical.

Martin guptill after saying
'kya be gandu" to chahal pic.twitter.com/ZIIXT9ixir

This one is hilarious!

Well, that says it all!

Some great quotes by famous cricketers:-

Virat Kohli, why you do this!

Apparently, the New Zealand batsman might not even know the meaning of what he actually uttered but what if he does. Anyways, it’s not a hidden fact that sportsmen pull each other’s legs during matches and this can also be a prank pulled off. No matter what, the quick funny scenario sure stirred an amusing debate on the internet.