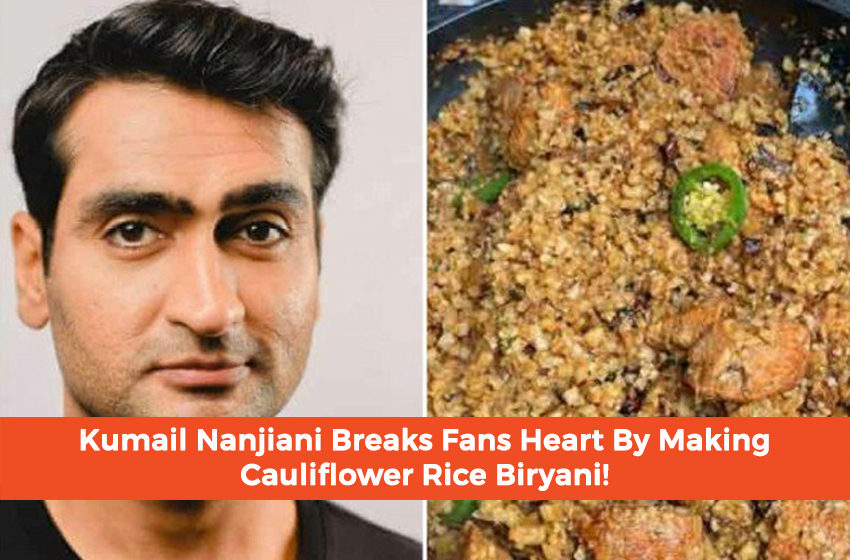 Looking at the social media activities of most of the stars, it is evident that self-isolation has shown their different traits. One of those celebrities is Pakistani actor Kumail Nanjiani who is in the news for his epic cauliflower biryani making skills.

Due to the COVID-19 outbreak, social distancing is slowly becoming a norm throughout the world. Being no exception to this epidemic, celebrities have also isolated themselves and have self quarantined.

The actor is all set to star in “The Eternals” alongside some Hollywood bigwigs.

Kumail recently posted a picture of biryani that he made himself. However, it came with a unique spin. Kumail Nanjiani named the dish as cauliflower rice biryani.

Nanjiani did admit that desis may not like his experiment. However, he asserted that it still tastes good.

Kumail tweeted on his official account: “Today in who-have-I-become, I made cauliflower rice biryani. I know desi people will consider this an abomination. I agree with you. I’m rolling my eyes at me too. But it tasted pretty dang good.”

Today in who-have-I-become, I made cauliflower rice biryani.

I know desi people will consider this an abomination. I agree with you. I’m rolling my eyes at me too.

It was evident that the desi people certainly were not impressed by Kumail’s creative experiment. Now Kumail Nanjiani is the centre of attention on social media due to the epic cauliflower biryani that he made.

Kumail and his wife Emily have also started a self-isolation podcast. Fans of Kumail and Emily that are interested to know what the couple have been up-to, they can listen to their podcast named Stay with Emily and Kumail.

Kumail and his wife, Emily V. Gordon, share their quarantine routine with social media enthusiasts and fans since the coronavirus outbreak in the United States.

The revenue derived from the Hollywood couple’s podcast would be donated to charities. Some of these charities include Feeding America, Centre for Disaster Philanthropy and the Restaurant Workers Community Foundation.

Emily and Kumail also stated that they would avoid about having any discussion regarding COVID-19. On the contrary, they would be providing recommendations on books, movies and board games. They will also chat with their friends regarding the experience of facing quarantine due to the coronavirus outbreak.

Emily suffers from Still’s disease. It is a rare type of inflammatory arthritis. This health condition requires her to stay indoors for most of the time. Emily’s health condition was also an inspiration for the 2017 hit romantic comedy, The Big Sick.

Did you find this information useful? Please let us know in the comments section below!