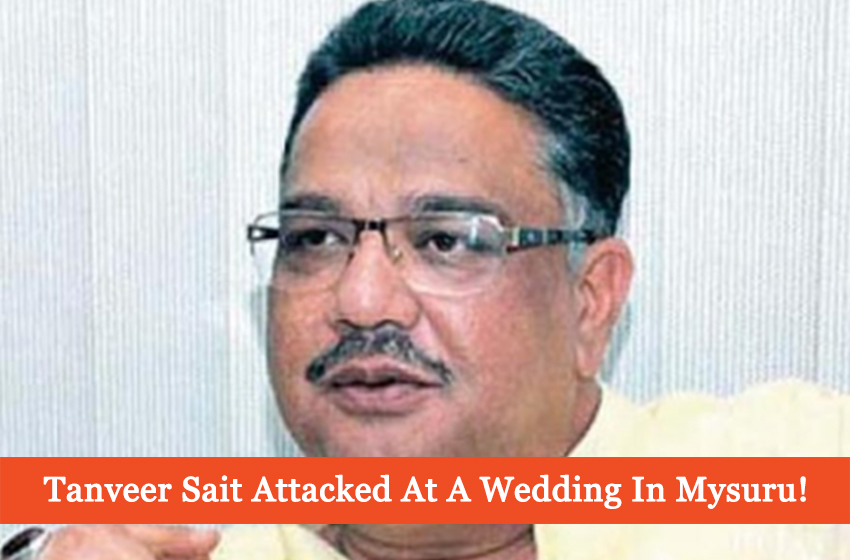 Politics is considered a dirty business because of the enmity it adheres within and the danger it brings upon one’s life. Time to time, people holding grudges against their governing bodies ends in a chaotic ceremony. Similarly, a former Karnataka minister Tanveer Sait was attacked at a wedding with a knife.

Apparently, this year has been a political disaster for India as its numerous false propagandas were unveiled to the world. However, India often stays in the news because of its vile implementation in the Kashmir valley, but, this time it’s different. Last week, former Indian Minister Tanveer Sait was attacked with a knife-wielding man at a wedding in Mysuru, India.

The incident was then covered by several news publishing companies!

Karnataka: Congress MLA Tanveer Sait was attacked with a sharp knife by a man, Farhan, during an event y'day in Mysuru. The MLA was admitted to a hospital & the attacker was taken into police custody. The reason behind the attack is yet to be ascertained. Investigation underway. pic.twitter.com/NH813Fic50

Certainly, the Congress Member of the Legislative Assembly (MLA) and the Ex-Karnataka minister endured severe injuries. According to reports, the attack was deployed by a 25-year-old boy Farhaan Pasha who is believed to be a resident of the same locality. After stabbing the knife, the young culprit tried to flee but was fortunately caught by the wedding guests for the police.

Later, Pasha from Udayagiri was arrested by the local police for investigation. Soon after the assault was made, minister Tanveer Sait was immediately rushed to the hospital for treatment. Reportedly, Karnataka’s former minister had gone under surgery at the Columbian hospital nearby. Moreover, the Indian minister is currently in recovering mode and his admirers have rounded up at the hospital to meet him.

Supporters of the Indian minister has rounded up at the hospital where the treatment is being provided!

As per the doctor’s statement, the Karnataka minister has sustained ‘deep cuts’ and ‘major injuries’. However, Sait’s supporters present at the wedding thrashed Pasha badly till the police arrived. Particularly, the massive followers and admirers of the minister then gathered up in numbers outside the Columbian Hospital in worry of their leader.

Check out: Gautam Gambhir Helped A Pakistani Girl To Get Indian Visa For Heart Surgery!

However, the reason behind the attack is still ascertained and the local police are interrogating the culprit. Regarding the unfortunate incident, an investigating officer KT Balakrishna stated, “Sait suffered injuries near his neck and was being operated”. Well, after performing the surgery, doctor reports say that the victim is now in stable condition and is out of danger.