10 Disaster Flops of Bollywood That Were Actually Great Films 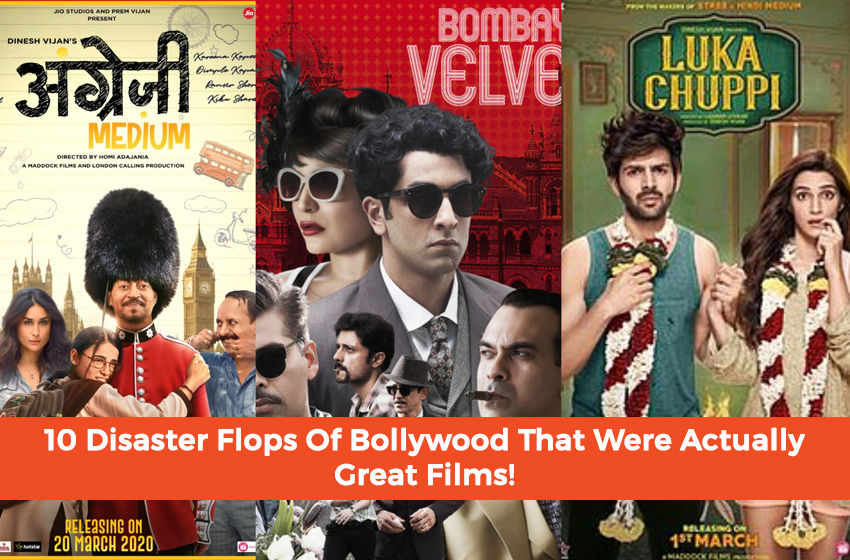 There are many films in Hollywood that are made by acclaimed film directors and are on a big budget. However, these big budget films often don’t get the success that is expected of them. In this article, we review 10 disaster flops of Bollywood that were actually great Bollywood movies.

Directed by Vasan Bala, Mard Ko Dard Nahi Hota stars debutante Abhimanyu Dasani along with Gulshan Deviah, Mahesh Manjrekar and Radhika Madan in pivotal roles. Grossing only 2.7 crores out of the budget of 17 crores, the film flopped at the box office as it was released on the same day as big budget Kesari (2019). However, the film was very well received by critics.

Anurag Kashyap’s No Smoking was a disaster at its release in 2007 grossing only 2.9 crores out of 7.5 crores budget. However, the John Abraham and Paresh Rawal film is now considered a cult classic. The film also has a rating of 7.1 on IMDB.

Sonchiriya is written and directed by Abhishek Chaubey. It had an ensemble cast of Sushant Singh Rajput, Bhumi Pednekar, Manoj Bajpayee, Ranvir Shorey and Ashutosh Rana. The film presents a rooted tale set in Chambal. The film only grossed 6.5 crores out of its 28 crores budget at the box office.

Another highly acclaimed film that failed at the box office was Photograph. It is directed by Ritesh Batra. It stars Nawazuddin Siddiqui and Sanya Malhotra in the lead roles. The film only grossed 1.29 crores at the box office.

Regarded as Irrfan Khan’s last film, Angrezi Medium is a 2020 Indian Hindi-language comedy drama film. Homi Adajania is the director of this film. The film was a sequel to the 2017 film Hindi Medium. It stars Kareena Kapoor Khan, Deepak Dobriyal and Radhika Madan in supporting roles. The film only grossed 10 crores against a budget of 40 crores but still is one of the great Bollywood movies.

Directed and co-produced by Anurag Kashyap, Bombay Velvet was based on historian Gyan Prakash’s book Mumbai Fables. It stars Ranbir Kapoor, Anushka Sharma and Karan Johar in lead roles with Kay Kay Menon, Manish Choudhary, Vivaan Shah and Siddhartha Basu appearing in supporting roles. The film only grossed 43 crores against a budget of Rs 120 crore and was a commercial disaster.

Laal Kaptaan is a great gem from Bollywood movies. Navdeep Singh is the director. Acting by each and every actor is literally great in this movie. Saif Ali Khan, Zoya Hussain and Deepak Dobriyal have all been wonderful. However, the film only grossed 5 crores at a budget of 30 crores.

Aligarh stars Manoj Bajpayee and Rajkummar Rao in the lead roles. Hansal Mehta is the director. On its world premiere at the 20th Busan International Film Festival, receiving a standing ovation. However, the film was a box office failure. It grossed only 3.7 crores at a budget of 11 crores at the box office.

Bhavesh Joshi Superhero is a Hindi vigilante action film. Vikramaditya Motwane is the director of this film. It stars Harshvardhan Kapoor in the lead role along with Priyanshu Painyuli, Ashish Verma and Nishikant Kamat in the supporting roles. Despite receiving positive reviews, the film was a commercial failure grossing only 1.5 Cr on a 21 Cr budget.

Directed by Nila Madhab Panda, Kadvi Hawa is based on climate change. It stars Sanjay Mishra, Ranvir Shorey and Tillotama Shome in lead roles. The film only grossed 8.7 crores at the box office.