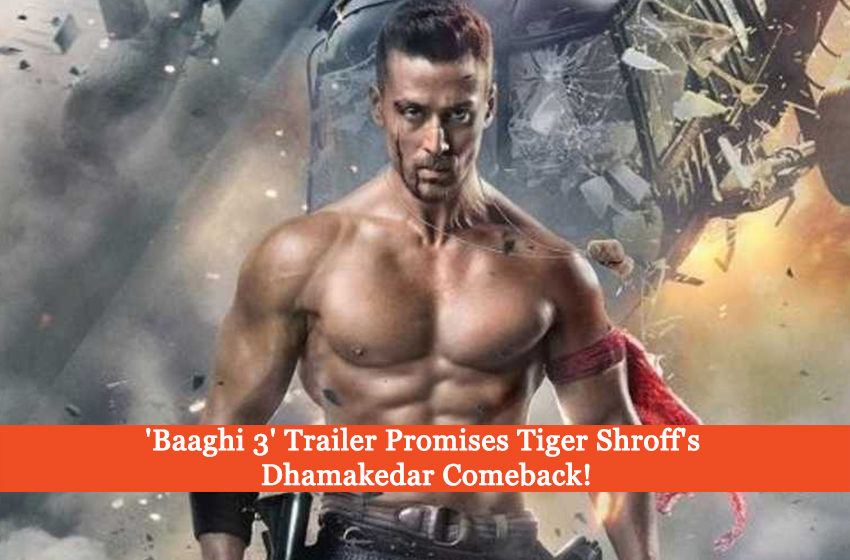 Among other famous Bollywood franchises, ”Baaghi” has created quite an impact over the audience since its first part was released. Apparently, the protagonist Tiger Shroff’s athletic structure and energetic soul, has garnered a massive fan following. However, the recently released trailer of Baaghi 3 has got cinema lovers all drooling over amazing performance and real stunts of Tiger Shroff.

Tiger Shroff to return to cinema screens with ”Baaghi 3”!

Certainly, as always, several tremendous Bollywood projects are under production and will be entertaining the audience later this year. Last year, in December, Salman Khan’s ”Dabangg 3” was globally loved and filled the internet with praises. Well, earlier, the wait is finally over as the trailer of ”Baaghi 3” is out and the talented Tiger Shroff is ready to blow off your screens.

The rebel is definitely back!

(1/2)The rebel is back & this time he's up against a nation to fight his greatest battle! Catch the explosive #Baaghi3Trailerhttps://t.co/J7qoHtrFir#SajidNadiadwala

Playing the role of [Ronnie], Tiger Shroff is shown on a self-appointed rescue mission of his brother Riteish Deshmukh [Vikram]. As per the details, the story reaches such a point after connecting the previous dots revealed in the last two parts. Particularly, the lead cast of ”Baaghi 3” includes Tiger Shroff as Ronnie, Riteish Deshmukh as Vikram and Shraddha Kapoor as Siya.

Here to fight the greatest battle of life!

Sharing the power-packed teaser on his official Twitter, Tiger Shroff captioned his agenda in the upcoming Baaghi 3. Particularly, the actor wrote, ”The rebel is back & this time he’s up against a nation to fight his greatest battle! Catch the explosive [Baaghi Trailer]”. Indeed, the rebel is back with more adventure and thrill to entertain the masses.

Apparently, the story revolves around Ronnie and Vikram, two opposite brothers sharing a bond more precious than blood. Eventually, Riteish Deshmukh [Vikram] who is a country cop somehow gets abducted by a terrorist group based in Syria. It then leads to Tiger Shroff [Ronnie]’s mission to go to Syria and rescue his hostage brother and bring him home.

Meanwhile, Shraddha Kapoor [Siya] enters the frame and then helps Ronnie in connecting the links in his rescue mission. Overall, the trailer looks promising and the audience is now eagerly waiting for the movie to be released. However, from time to time, Tiger Shroff’s abs and his muscular avatar have gathered severe attention and appreciation.

Check out the official trailer of ”Baaghi 3′‘!

Talking of movies, the exceptional transformation of several actors for their respective roles have always been amusing. Earlier, Kangana Ranaut’s amazing transformation for her upcoming movie ”Thalaivi” stunned social media users. However, ”Baaghi 3” is all set to drop at world cinema screens next month on March the 6th.

What do you think of the trailer? Tell us in the comments section below!