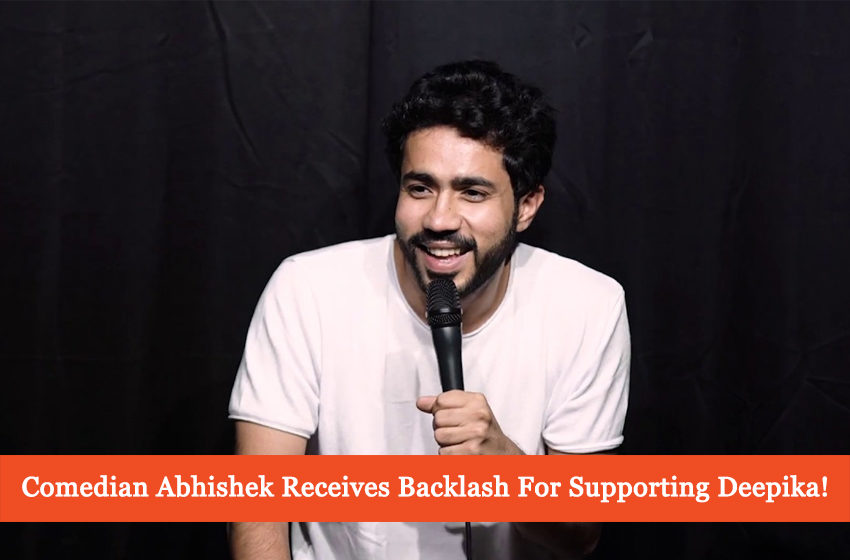 In this technologically advanced era, famous personalities have been caught in a chaotic bubble, online. However, as the world keeps on escalating with time, supporting a cause can also lead to harsh consequences. As of now, India’s stand-up artist Abhishek Upmanyu is being schooled for supporting Deepika Padukone.

Having interest in welfare activities, the ”Ram Leela” star recently joined a protest during her promotions. Reportedly, Deepika Padukone was in New Delhi for the promotion of her upcoming feature ”Chhapaak”. Apparently, Abhishek Upmanyu’s supportive tweet for Deepika Padukone landed him in hot waters.

Here’s what the star comic tweeted!

Calling the Bollywood star a heroine in reel life and a hero in real life, the comedian offered his praises. According to Indian media reports, protestors unexpectedly spot Deepika Padukone who was there to show support at Jawaharlal Nehru University (JNU). Reportedly, the protest was held against the students by the members of an extremist political alliance.

Twitter on fire after Deepika Padukone joins the JNU protest!

Alright, Humble, whatever you say!

Bhai How can you relate her with real life Hero or heroine..just becoz someone goes out and joins a protest, he/she bcomes Hero or heroine..You have some misconceptions..You cannot support someone who hold "Free Kashmir" card in hands..Stay away frm politics bro..I'd advise

You know , who was the main culprit of 'Laxmi Acid attack' (2005)… His name was "Nadeem Khan" but Now your so called Hero and Heroine #DeepikaPadukone Making a Movie Chappak over that incident in which she changed the name of that man"Rajesh" from Nadeem Khan! Deal with it !

She will lose her credit.

She is Promoting Chapaak.
She is not with students.

We will skip this Movie.
Request all not to watch this movie but pirated one if you want…..

Loaded with rocks, sledgehammers and wood sticks, the mob brutally assaulted the teachers and students of JNU. To attract attention, the victims gathered for a protest in front of the university on Tuesday night. Already on her tour, Deepika Padukone went to the university and stood tall with the protestors.

Currently, the Bollywood diva is busy promoting her upcoming biopic ”Chhapaak” based on the life of an acid victim. Last year, Deepika Padukone was also rumored to appear in another Hollywood movie but sources haven’t confirmed yet. Deepika Padukone’s ”Chhapaak” is all set to release on 10th January 2020 and hopefully will receive a positive response from the audience.

What do you think of Deepika Padukone joining the protest? Tell us in the comments section below!