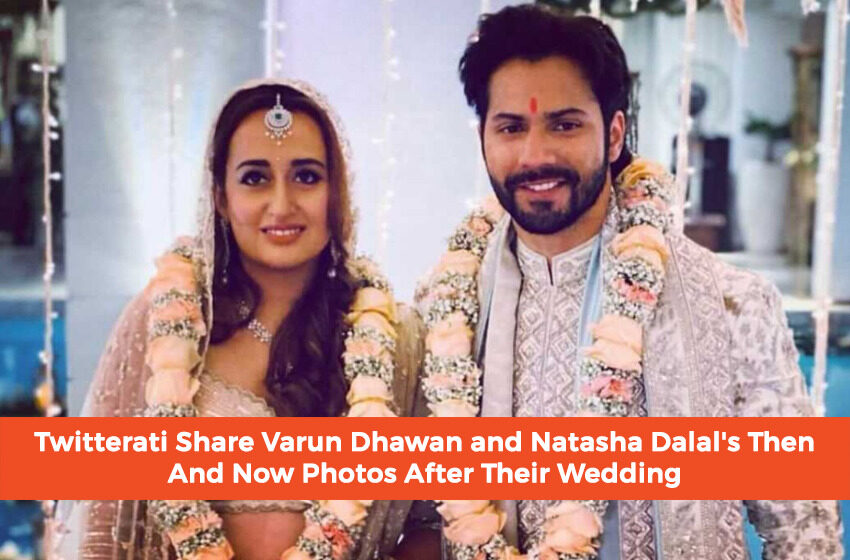 Bollywood’s superstar Varun Dhawan has finally tied the knot with his childhood sweetheart, Natasha Dalal in an intimate wedding ceremony at Alibaug.

The guest list for Varun and Natasha’s wedding was trimmed to include only 40-50 guests. This was mainly in compliance with the Covid-19 pandemic protocol. Karan Johar, Manish Malhotra, Shashank Khaitan and Kunal Kohli were also among the Bollywood celebrities in attendance.

The bride and the groom were looking smashing in their wedding outfits as they opted for a similar colour palette comprising pastel pink, ivory white, golden and light grey. Varun sported ivory white sherwani, while Natasha went for a light golden lehenga with  V-neck blouse. She paired it with a sheer georgette dupatta.

Netizens congratulate Varun and Natasha on their big day!

When the actor finally shared his wedding pictures on social media, the pictures went viral. As of now, fans have taken their Twitter handles so that they can pour in their love for the couple alongside their then-and-now pictures.

From congratulating Natasha and Varun to praising the actor for his sweetest love story, netizens were in all praise for the newlywed couple. Many users were of the view that Varun and Natasha’s wedding pictures look straight outta fairytale. The fact that Varun married his childhood sweetheart and not let the industry he’s working in affect him speaks a lot about him.

True definition of love
U have to accept it
They were dating from collage days
And today they got married
Mere sath bhi aisa hi ho insaallah
May allah bless them 🤗🤗💕
One of my fav couple #VarunWedsNatasha #VarunKiShaadi #VarunDhawan pic.twitter.com/PHUnf5h4B9

SO VARUN DHAWAN IS MARRIED. I NEED SOME TIME TO PROCESS THIS. Congratulations boy @Varun_dvn . We're SO HAPPY for you 💗💗🧿 all the best wishes to you and natasha for this new chapter in your lives.#VarunKiShaadi #NatashaGotDhaOne pic.twitter.com/8KCzFofiN4

Varun Dhawan and Natasha Dalal got married today, congrats to this beautiful couple and pray for their better tomorrow…jokes-apart but congratulations for their new chapter of life 💗 pic.twitter.com/bKLVnpo8xM

The love story of Varun Dhawan and Natasha Dalal

Natasha Dalal and Varun Dhawan had a decent wedding. They have known each other since their school days. The couple fell in love when they met at a music concert a few years later. They have also kept their relationship hidden from the media for years. After Varun Dhawan became an actor, reports started pouring in on social media that he is dating Natasha Dalal, a fashion designer. However, the couple never made a public announcement of their relationship status.

They have also tried their best to keep their relationship hidden. However, the paparazzi will always click them whenever they step out for an outing or a date. According to several reports, it was Natasha who was hesitant to come under the media spotlight.

There are also reports in the media that Varun and Natasha will host a glitzy reception at a five-star hotel in Mumbai on February 2 mainly for their friends and various other Bollywood celebrities.