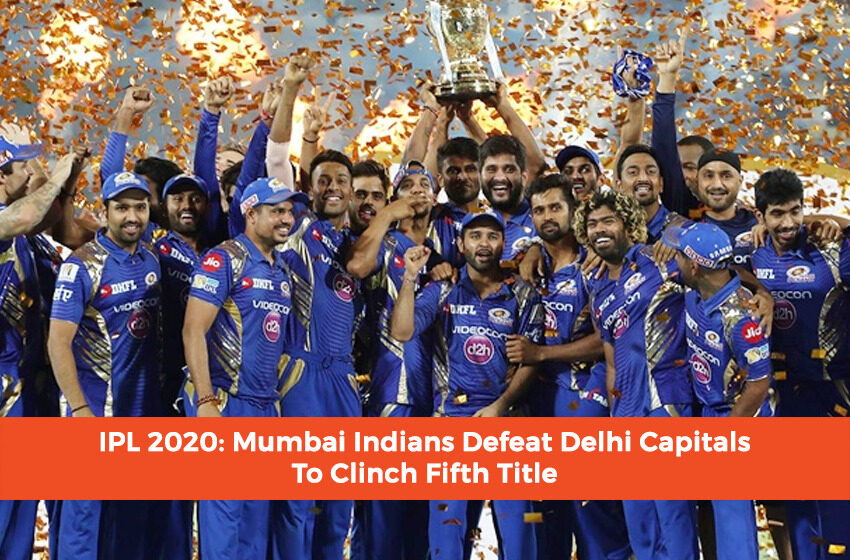 Mumbai, the most successful team in IPL history, chased 157 with eight balls to spare as captain Rohit Sharma hit 68. New Zealand’s Trent Boult took 3-30 for Mumbai. His wicket also included Marcus Stoinis with the first ball of the match in Dubai.

Delhi were 22-3 before captain Shreyas Iyer made 65 not out. He had a partnership of 96 with Rishabh Pant. However, Mumbai did make sure Delhi’s total was never enough.

The defending champions were always in control of their run chase. Openers Rohit Sharma and Quinton de Kock plundered 45 from the first four overs. Later, Rohit was caught at deep mid-wicket with 20 needed from 23 balls. Although Kieron Pollard and Hardik Pandya soon followed, Ishan Kishan’s unbeaten 33 off 19 balls took Mumbai to victory.

Mumbai’s victory over Delhi follows their IPL wins in 2013, 2015, 2017 and 2019. It also means that they have now won the world’s premier domestic Twenty20 competition at least twice more than any other team in the world.

England fast bowler Jofra Archer was named as the most valuable player. The fast bowler took 20 wickets and scored 113 runs, including 10 sixes, for Rajasthan Royals.

Social media users around the world were very happy with the performance of Mumbai Indians after it wins IPL 2020. They congratulated Mumbai on their win.

Below are some of the reactions:

What a victory by the boys! Complete domination by @mipaltan!

Well done to the players and the support staff who have continued from where they left off last year. 👏🏻#MIvDC #IPLFinal pic.twitter.com/ncRaxDUgLl

Congratulations @mipaltan: the greatest T20 team of all time & quite possibly the best. That is one of the most dominant IPL campaigns ever (they only lost three in regular time) & they did it while missing Rohit for four matches & with Hardik not bowling a single ball. #IPL2020

He is custom-made for big stage. Bigger the game, better he gets! What an innings #pullman Sharma @ImRo45 #ProGyaan #IPLfinal #IPL2020 #MIvsDC

IPL 2020 happened despite of pandemic

This year’s IPL, originally scheduled to begin on March 29, was shifted to the United Arab Emirates (UAE) following the COVID-19 pandemic. It was initially thought that IPL 2020 would be cancelled and not happen this year.

With many sporting events around the world called off due to the COVID-19 pandemic, including the postponement of Tokyo Olympics 2020, BCCI was hesitant to take any risks by playing cricket.

In a statement to the local media, BCCI secretary Jay Shah said “The BCCI along with all the IPL franchises have reiterated BCCI’s stand of putting the safety and well-being of fans, athletes, and employees as a priority. The board will continue to monitor and work closely with the Government of India, state governments and other states regulatory bodies to decide on the future course of action in the best interest of public health.”

However, it was later decided by BCCI that the tournament will be held this year but on a neutral venue with no spectators allowed.