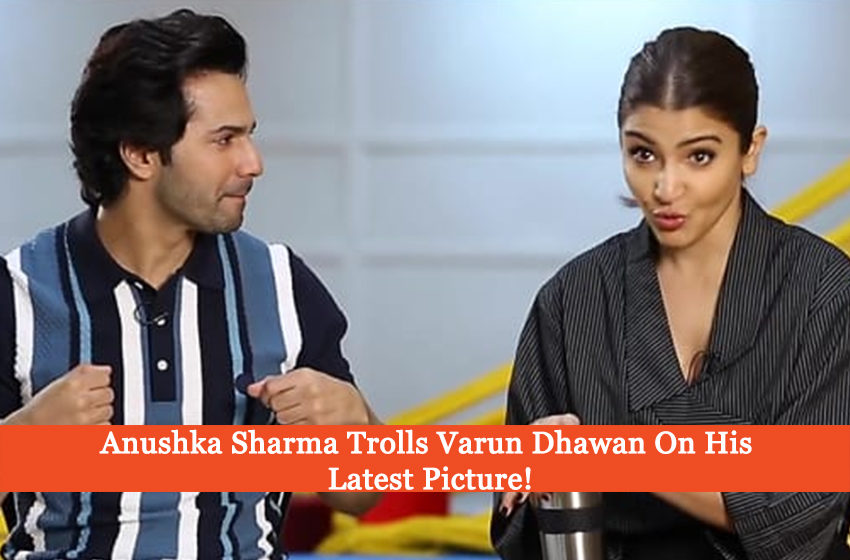 Bollywood heartthrob Varun Dhawan is currently busy promoting his upcoming film ‘Street Dancer 3D’. And we all know what happens when celebrities are busy promoting their upcoming films, right? In case you don’t know, well, they bombard their social media accounts with tons of pictures, videos and snippets from the film!

And those pictures and videos tend to go viral on social with the speed of light! Just recently, Varun Dhawan, while promoting his film, posted a picture of himself with his fur babies. However, he actually looked kinda good! *Hehe*

In the pictures, Varun was seen donning a white t-shirt with a black leather jacket and ripped denim shorts. And among thousands of comments on his pictures, we came across Anushka’s comment and it was hilarious. Let’s admit it, we love her wit!

Guys, this is actually hilarious!

Who knew Anushka Sharma would comment this on his picture?

Her comment, “Are these doggos guilty of biting off your jeans?” literally tickled our bellies! Well, she was sure quick to comment!

Speaking of his fashion sense in an interview, Varun’s stylists Priyanka and Kazim said, “Varun is an absolute breeze to collaborate with and there’s never a dull moment. His brief varies, depending on the event. But it’s always ‘keep it fun’. He is drawn to the most fun options we can think of and doesn’t take his dressing too seriously.”

We sure know how cute Anushka Sharma is and let’s not even start talking about the couple! Just recently,  the couple was in Switzerland, enjoying the holiday season with Saif Ali Khan, Kareena Kapoor and Varun Dhawan.

Happy new year from us to each and every one of you. God bless you all. 🙏❤️😇

Moreover, the film is also said to clash with Kangana Ranaut’s film, Panga which is directed by Ashwiny Iyer Tiwari. Well, we’re gonna have to wait and see which film’s going to perform brilliantly in the box-office.