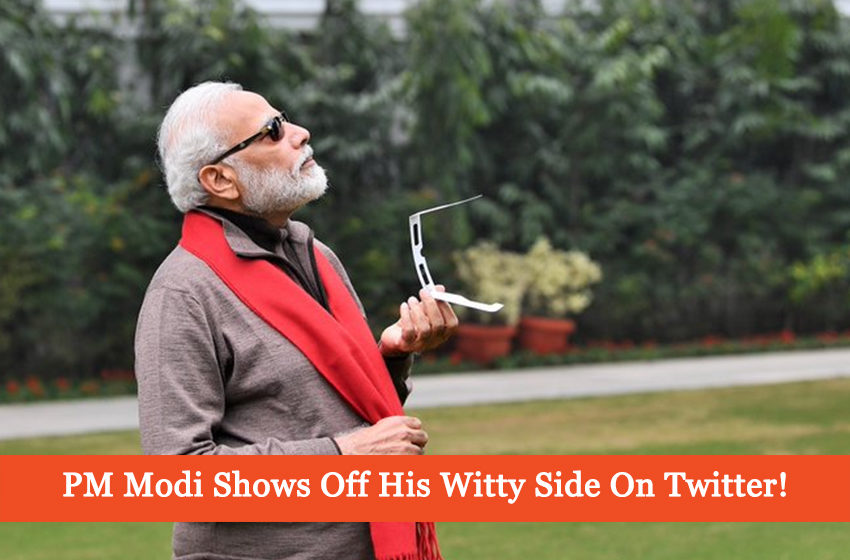 Recalling all the entertaining stuff India has provided the world within 2019, Prime Minister Narendra Modi tops the list. From his controversial statements to his ‘shaky’ meetings with other world leaders, embarrassed Indian nation has faced it all. Apparently, yet again, PM Narendra Modi emerged as a new internet meme earlier today after a Twitter user’s keen observation on his recent picture.

Certainly, it would have been an unexpected surprise for the Indian user as such ‘unexpected’ scenes don’t happen every day. Last week also, PM Narendra Modi embarrassed India after falling on Ganga Ghat’s steps during his Kanpur visit. Well, this time, PM Narendra Modi has turned out to be an active social media user after he responded to a Twitter user’s ‘meme’ wish.

As of today, the news of solar eclipse has got everyone worried but also excited to witness the rare sight under proper guidance. Similarly, PM Narendra Modi also turned out to be a thrilled soul and showed his ‘enthusiasm’ for the event on Twitter. With his picture with black shades and red scarf holding another pair of glasses, PM Narendra Modi posted his experience of the solar eclipse.

Unfortunately, I could not see the Sun due to cloud cover but I did catch glimpses of the eclipse in Kozhikode and other parts on live stream. Also enriched my knowledge on the subject by interacting with experts. pic.twitter.com/EI1dcIWRIz

With the hashtag #solareclipse2019, PM Modi wrote, “Like many Indians, I was enthusiastic about #solareclipse2019. Unfortunately, I could not see the Sun due to cloud cover but I did catch glimpses of the eclipse in Kozhikode and other parts on live stream. Also enriched my knowledge on the subject by interacting with experts”.

“This is becoming a meme”!

Well, it was when the meme God chose Narendra Modi to do something better and entertain the world today. Eventually, the Indian PM’s latest pictures caught a Twitter user’s attention who predicted the ‘funny popularity’ of it. A Twitter user named Gappistan Radio with a huge following of 63.3k, reposted PM Narendra Modi’s solar eclipse picture with the caption “This is becoming a meme”.

Apparently, the tweet caught massive attention from around the world that even PM Modi himself couldn’t resist responding to it. Responding to the ‘meme’ question, the Indian PM quoted the Twitter user’s post and wrote, “Most welcome….enjoy”. Well, it turned out to be a lucky day for the Twitter user as the digital nation started sharing their hilarious takes on the stance.

Here goes the first one with the Trumps!

The truth has been revealed!

Without a doubt, the responses are extremely amusing and the good thing is the internet is filled with such creativity. Earlier, in October, PM Narendra Modi’s plogging at the beach started a trolling session for the digital awaam. Hopefully, it’s not over as the world would love to see some world leaders getting bashed virtually by the masses.

Have something to add to the story? The comments section is all open!

This Indian Wife’s Journey To Kartarpur Corridor Is...